Watched by invited guests and members of the press, the SRT_01E has been designed and built by Spark Racing Technology, headed by the renowned Frédéric Vasseur, together with a consortium of the leading manufacturers in motorsport, and will compete in the inaugural FIA Formula E Championship – the world’s first global electric race series 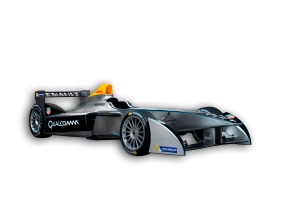 beginning in September 2014. Using the very latest technology, the SRT_01E aims to push the boundaries of what is currently achievable in electric motorsport, whilst ensuring a balance between cost-effectiveness and sustainability, in addition to coping with the demands of racing entirely on city-centre circuits.

The car’s monocoque chassis has been constructed by leading Italian firm Dallara and has been aerodynamically designed to aid overtaking. Made from carbon fibre and aluminium, the chassis will fully comply with the 2014 FIA crash tests. Providing the electric motor, gearbox and electronics is McLaren Electronics Systems, the world leader in high- performance technology for motorsport. Williams Advanced Engineering, part of the Williams group of companies that includes the world famous Williams F1 Team, is responsible for the design and supply of the batteries and their battery management systems; producing 200kw (the equivalent of 270bhp).

Overseeing all the systems integration, performance optimisation and powertrain electrical safety is Formula E’s Technical Partner Renault, a leader in electric vehicles and an expert in motorsport thanks to its Renault Sport Technologies and Renault Sport F1 programmes. Meanwhile, custom made 18-inch treaded tyres have been created by Official Tyre Partner Michelin, with just one durable tyre to cater for both wet and dry conditions and helping to reduce overall costs and promote sustainability.

The car, which has been 10 months in the making, will be used by all 10 teams and 20 drivers competing in the new zero emission series although only for the first season as Formula E is an ‘open championship’ designed to encourage manufacturers to build their own car to help accelerate R&D around the electric vehicle. A total of 42 cars will be produced by Spark with each driver using two cars during the one hour races.

As well as Jean Todt and Alejandro Agag, the launch event was also attended by representatives from all the Championship’s partners, sponsors and teams together with development driver Lucas di Grassi and newly-announced Racing Ambassador Gil de Ferran.

But that’s not enough for Formula E as a further important news has just been delivered.

The Qualcomm  company  announced a multiyear agreement with Formula E Holdings to become an Official Founding Technology Partner of the FIA Formula E Championship, the agreement will allow Qualcomm and FEH to showcase mobile and Electronic Vehicle technologies globally through an exhilarating sport and demonstrate how current and future generations all over the world, can benefit from wireless, sustainable technology on and off the track. As a leader in the mobile space, Qualcomm will advise FEH in their quest to incorporate new and more sustainable technologies into the racing series. As a start, Qualcomm Halo™ Wireless Electric Vehicle Charging (WEVC) technology will be adapted to be fitted into the 2014/2015 FIA Formula E Championship safety cars so they can be wirelessly charged. The wireless charging system will be made available to the race cars from season two.  Qualcomm Halo WEVC technology uses resonant magnetic induction to transfer energy between a ground-based pad and a charging pad on the electric vehicle.  Drivers simply park over the base pad and charging commences automatically.